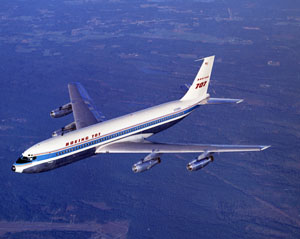 After World War II, the British paved the way for commercial jets with the de Havilland Comet. Tragically, structural problems that led to catastrophic accidents grounded the Comet — and enthusiasm for the commercial jet.

Boeing Company President William Allen and his management are said to have "bet the company” on a vision that the future of commercial aviation was jets. In 1952, the Boeing board gave the go-ahead to commit $16 million of the company’s own money to building the pioneering 367-80, nicknamed the “Dash 80.” That then-huge amount represented nearly all the profit the company had made since the end of the World War II.

They set out to counter public nervousness. The Boeing strategy was to use the Dash 80 prototype for press and customer flights and an advertising campaign that was directed at the public, stressing the comfort and safety of jet air travel.

The campaign also included a film shown to airline customers titled “Operation Guillotine.” The film of a Boeing test showed a conventional, fully pressurized airplane fuselage being pierced by two metal blades, resulting in a catastrophic failure and disintegration of the structure. Next, the 707 fuselage was put to the same test; this time, five blades pierced the pressurized fuselage, resulting in wisps of air escaping from the punctures — but no cracks and no structural failure.

The Dash 80 prototype led to the commercial 707 and the military KC-135 tanker. Both planes shared the basic design of the Dash 80 but were very different airplanes, neither one being a derivative of the other. One great difference was in the width and length of the fuselage. Airlines wanted the 707 fuselage to be 4 inches (2.5 centimeters) wider than the tanker’s. Its width and the 100-foot length (30.5-meter) made it the largest passenger cabin in the air. Placement of its more than 100 windows allowed airlines to rearrange seats. Location of passenger doors on the left side, at the front and at the rear of the cabin, became standard for subsequent Boeing jets. The exteriors of the 707 and its competitor, the DC-8, were almost identical, but the 707 wing had more sweepback, so it could fly about 20 mph (32 kph) faster.

In just two years, the 707 would help change the way the world traveled. Travel by air eclipsed travel by rail and sea. The dawn of a new era in travel helped to make the terms “Boeing” and “707” fashionable. Requests poured into Boeing for rights to use “707” for naming products. Jantzen swimwear titled its 1957 collection “the 707.”

To take market share away from its strong competitor the Douglas DC-8, Boeing custom-designed 707 variants for different customers. Boeing, for example, made special long-range models for Qantas Airways of Australia and installed larger engines for Braniff’s high-altitude South American routes. Costs of such customizing were high, so with every version of the 707, the financial risk increased. After much effort, sales of the 707 picked up. The risk taking paid off, and the 707 outpaced the DC-8 in sales.

The 707 was designated the 720 when it was modified for short- to medium-range routes and for use on shorter runways. Engineers reduced the fuselage length by 9 feet (2.7 meters), changed the leading edge flaps and later installed turbofan engines. Boeing built 154 720s between 1959 and 1967. Its short- to medium-range role was later filled by 727s and 737s.