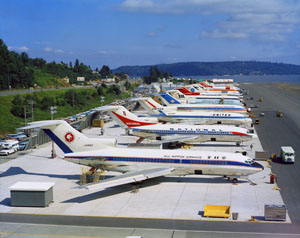 It was the first commercial airplane to break the 1,000-sales mark, but it started out as a risky proposition. The 727 was designed to service smaller airports with shorter runways than those used by Boeing 707s. U.S. companies already working to compete in this market included Lockheed, Convair and later Douglas, with what would become the DC-9. Boeing also faced overseas competition from such airplanes as the de Havilland Trident, Sud Aviation Caravelle and British Aircraft Corp. BAC 1-11.

Adding to Boeing’s challenges were conflicting demands from customers: some wanted four engines, another wanted a twin, still others were satisfied with prop planes. Boeing was also still grappling with the startup and production costs of the 707. The decision to go forward on a new commercial plane was a risk that many at Boeing advised against. On Dec. 5, 1960, Boeing announced the three-engine 727, with 40 orders each from launch customers United Airlines and Eastern Air Lines.

Of all the early Boeing jets, the 727 had the most distinctive appearance, with its rakish T-shaped tail and its trio of rear-mounted engines. It carried billions of passengers on everything from short hops to cross-country flights.

The 727 was the first Boeing jetliner to undergo rigorous fatigue testing, the first to have completely powered flight controls, the first to use triple-slotted flaps and the first to have an auxiliary power unit (APU). The APU was a small gas-turbine engine that eliminated the need for ground power or starting equipment in the more primitive airports of developing countries.

Originally, Boeing planned to build 250 of the planes. However, they proved so popular (especially after the larger 727-200 model, which carried up to 189 passengers, was introduced in 1967) that a total of 1,832 were produced at the Renton, Wash., plant. Variants included a convertible passenger-cargo model with a Quick Change (QC) option — seats and galleys attached to removable pallets.