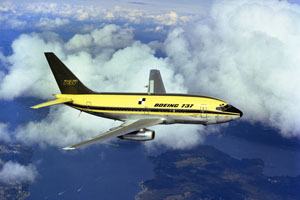 In 1965, the Boeing name was synonymous with big multiengine jet airplanes, so when the company announced its new commercial twinjet, the 737, it quickly earned the nickname “Baby Boeing.”

The first 737 was the last new airplane to be built at Plant 2 on Boeing Field in Seattle, with a production run that included the legendary B-17 Flying Fortress, B-52 Stratofortress and the world’s first large swept-wing jet — the XB-47 Stratojet. While the old assembly building at Plant 2 seemed cavernous, it still wasn’t tall enough for the 737’s tail, which was attached using a crane in the parking lot. The plane was then rolled down to a nearby plant known as the Thompson Site, where Boeing had set up the first production line for the 737.

At a ceremony inside the Thompson Site on Jan. 17, 1967, the first 737 was introduced to the world. The festivities included a christening by flight attendants representing the 17 airlines that had ordered the new plane.

In 1967, the smaller, short-range 737 twinjet was the logical airplane to complement the 707 and the 727. There was increasing demand for transports in its category, but the 737 faced heavy competition from the Douglas DC-9 and the British Aircraft Corp. BAC 1-11.

To save production time, and get the plane on the market as soon as possible, Boeing gave the 737 the same upper lobe fuselage as the 707 and 727 so that the same upper deck cargo pallets could be used for all three jets. The 737 later adopted the 727’s cargo convertible features, which allowed the interior to be changed from passenger to cargo use in the 737-200 series.

The 737 had six-abreast seating — a selling point, because this way it could take more passengers per load (the DC-9 seated five abreast). The number of seats in the 737 also was increased by mounting the engines under the wing. This engine placement buffered some of the noise, decreased vibration and made it easier to maintain the airplane at ground level. Like the 727, the 737 could operate self-sufficiently at small airports and on remote, unimproved fields. The plane’s performance in these conditions led to orders in Africa, Central and South America, Asia and Australia.

At first, the 737 was called the “square” airplane because it was as long as it was wide. The new technology made the position of flight engineer redundant; the 737’s two-person flight deck became standard among air carriers.

The Boeing Business Jet (BBJ), launched in 1996 as a joint venture between Boeing and General Electric and designed for corporate and VIP applications, is a high-performance derivative of the 737-700. The BBJ 2, announced in October 1999, is based on the 737-800 and has 25 percent more cabin space and twice the cargo space of the BBJ.

The 737 serves as a platform for military derivatives, including airborne early warning and control (AEW&C). Nineteen 737-200s, modified as T-43 navigator trainers, served with the U.S. Air Force. The 737 also provides a platform for the U.S. Navy P-8A Poseidon, a long-range maritime patrol and reconnaissance aircraft. The Navy C-40A Clipper is certified to operate in an all-passenger configuration, an all-cargo variant, or as a “combi” that accommodates both cargo and passengers on the main deck. The Air Force C-40B provides safe, comfortable and reliable transportation for U.S. combatant commanders and other senior government officials to locations around the world.

The site is now producing 737s at a rate of 52 airplanes per month and is on track to increase production to a rate of 57 per month in 2019.

The number one 737 was a prototype used for flight test and certification and never went into revenue service. In 1974, the plane turned in its Boeing house livery of dark green and cream for the sporty white and blue colors of NASA. For the next two decades, the plane was based at the NASA Langley Research Center in Virginia and had an outstanding career as a flying laboratory. Today, the plane is on display at the Museum of Flight in Seattle surrounded by its bigger family members from the early 7 series and parked just a few hundred feet from where it first took to the air 40 years ago.