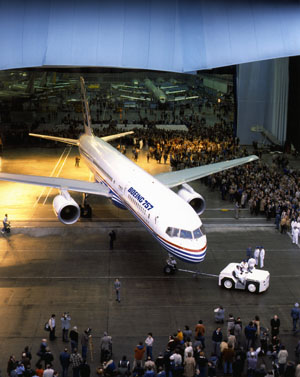 The twin-engine, medium-range 757 was up to 80 percent more fuel efficient than the older 727 jetliners it was designed to replace but retained the 727’s short-field capability. The 757-200 carried up to 228 passengers and had a range of approximately 3,900 nautical miles (7222 kilometers).

The 757 and the 767 were developed concurrently, so both shared the same technological advances in propulsion, aerodynamics, avionics and materials. The pioneering two-crew computerized flight decks, or “glass cockpits,” of the 757 and 767 are nearly identical, so pilots could easily qualify to fly both.

In late 2003, Boeing decided to end 757 production because the increased capabilities of the newest 737s and the new 787 fulfilled the 757 market’s needs. On April 27, 2005, Boeing concluded the remarkable 23-year run of the 757 passenger airplane by delivering the final one to Shanghai Airlines. The airplane was the 1,050th Boeing 757.