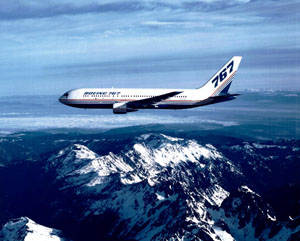 The Boeing 767, built in Everett, Wash., alongside the 747, can carry from 200 to 300-plus passengers. The 767 is a wide-body, double-aisle jet, but, like the smaller standard-body 757, it was designed for fuel efficiency. Both planes have nearly identical digital cockpits, allowing crews to be easily qualified on both. In 1985, as the pioneer for ETOPS (for "Extended-range Twin-engine Operational Performance Standards"), the 767 was certified for extended flights that would make it the first commercial twin jet to fly regular routes across the Atlantic. The 767-200 was first ordered in 1978, and the last was delivered in 1994. Its extended-range model, the 767-200ER, entered service in 1984. The 767-300 was first ordered in 1986 and was followed by its extended-range model, first delivered in 1988.

In December 1991, Boeing offered a modified 767 commercial jetliner as the platform for its Airborne Warning and Control System (AWACS), previously carried aboard the 707. The first of the 767 AWACS, designated E-767, made its first flight Aug. 9, 1996, and the government of Japan ordered four of them.

On Feb. 2, 2011, hundreds of employees, joined by Boeing retirees who worked on the first 767, gathered to celebrate the 1,000th 767 at the Everett, Wash., factory. Just weeks later, on Feb. 24, the U.S. Air Force awarded a contract to Boeing to develop a tanker to replace its aging KC-135 fleet. Based on the 767-2C, a freighter version of the 767-200ER, the new KC-46 Pegasus is able to refuel 64 different aircraft and can detect, avoid, defeat and survive threats using multiple layers of protection. The U.S. Air Force took delivery of its first two KC-46A tankers in December 2018.

The 767 has evolved to meet changing market requirements. The 767 freighter has a high-capacity cargo arrangement on both main deck and lower hold and can carry 59 tons (53 tonnes) of revenue cargo with intercontinental range. The 767 has also incorporated advanced avionics, aerodynamics, materials and propulsion into the passenger airplanes. The 767 is the only Boeing product that serves the freighter, passenger and tanker markets.