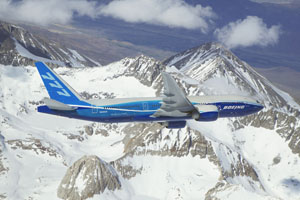 The Model 777, the first entirely new Boeing airplane in more than a decade, was the first jetliner to be 100 percent digitally designed using three-dimensional computer graphics. Throughout the design process, the airplane was “preassembled” on the computer, eliminating the need for a costly, full-scale mock-up.

The 777 was larger than all other twinjet or trijet airplanes but smaller than the 747 and included improvements in airfoil technology, flight deck design, passenger comfort and interior flexibility. The airplane seats from 301 to 386 passengers in a three-class configuration with a range capability of 5,240 nautical miles (9700 kilometers) to 9,395 nautical miles (17,395 kilometers).

The 777X is Boeing’s newest family of twin-aisle airplanes. In November 2013, Boeing Commercial Airplanes launched the airplane at the Dubai Airshow with 259 commitments from four customers. Production of the 777X was scheduled to begin in 2017, and first delivery was targeted for 2020.

The 777X was designed to be the largest and most-efficient twin-engine jet in the world, with 12 percent lower fuel consumption and 10 percent lower operating costs than the competition.

In 2012, Boeing began developing an advanced manufacturing technology for 777 fuselages known as Fuselage Automated Upright Build, or FAUB. With this technology, fuselage sections are built using automated, guided robots that fasten the panels of the fuselage together, drilling and filling the approximately 60,000 fasteners that were originally installed by hand.

The 777 is the first airplane to have a rose named after it. The deep purple-red rose, with a citrus-like fragrance, was developed by Olympia, Wash., Western Independent Nurseries.