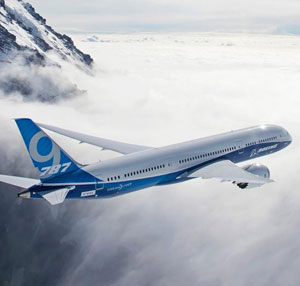 On Jan. 29, 2003, Boeing gave a development designation to name to a new super-efficient, midsized airplane — the Boeing 7E7 — and released the first image of the airplane concept. The company said the designation signaled its commitment to develop a new airplane with major breakthroughs in a lot of areas starting with the letter “E,” including “efficiency, economics, environmental performance, exceptional comfort and convenience, and e-enabled systems.”

The Boeing 7E7 was developed with an international industry team as a 200- to 250-seat airplane providing nonstop, point-to-point service at speeds similar to the Boeing 777 and 747. The company expected to formally offer the new airplane to customers in early 2004, with entry into service targeted for 2008. It took longer than expected, but when it arrived, it was the fastest selling wide-body airplane in history.

On Dec. 15, 2009, the 787 Dreamliner made its first flight from Paine Field in Everett, Wash., under the control of Capt. Mike Carriker and Capt. Randy Neville. It took off at 10:27 a.m. Pacific time and concluded its flight with touchdown at 1:33 p.m. Pacific time at Boeing Field in Seattle. Boeing celebrated the delivery of the first 787 Dreamliner to launch customer ANA on Sept. 26, 2011, at the Everett plant. The 787-9 took flight on Sept. 17, 2013, launching a comprehensive flight-test program leading to certification and first delivery to launch customer Air New Zealand in June 2014.

Passengers enjoy an interior environment with higher humidity and a feeling of space and comfort, with larger windows and an open architecture with streamlined arches.

As much as 50 percent of the primary structure on the 787, including the fuselage and wing, is made of composite materials. General Electric and Rolls-Royce provide engines for the 787.

The 787 program opened its final assembly plant in Everett in May 2007. On July 30, 2008, Boeing acquired the business and operations conducted by Vought Aircraft Industries in North Charleston, S.C. On Oct. 28, 2009, Boeing announced the facility will be the location for a second final assembly site for the 787 Dreamliner, breaking ground less than a month later. In late 2011, the airplane earned records for completing the longest flight for an airplane in its weight class (440,924 to 551,155 pounds, or 200,000 to 250,000 kilograms) with a 10,336-nautical-mile (19,142-kilometer) flight to Dhaka, Bangladesh. This record had previously been held by the Airbus A330 with a 9,126-nautical-mile (16,901-kilometer) flight in 2002. Following refueling in Dhaka, the crew continued eastbound and returned to Seattle 42 hours, 26 minutes after their initial departure, completing the fastest around-the-world trip for the same weight class at 470 knots (541 mph, 871 kph). There was no previous around-the-world speed record for this weight class.

In 2012, the Dreamliner team was honored with a 2012 Aviation Week Laureate Award in Aeronautics/Propulsion; the 2011 Robert J. Collier Trophy; and the 2012 Hermes Awards for Innovation given by the European Institute for Creative Strategies and Innovation.

On Nov. 17, 2013, the airplane received its 1,000th customer order when Etihad Airways announced an order for 30 787-10 Dreamliners. The Dreamliner family had reached this sales milestone faster than any other wide-body airplane in aviation history, and eight years faster than the popular 777.

On Nov. 8, 2014, Boeing donated one of the original 787-8 Dreamliner flight test airplanes to the Museum of Flight in Seattle. The airplane Boeing donated to the museum, known as ZA003, was the third 787-8 produced. The airplane had been part of the 787 flight test and certification program, and it circumnavigated the globe several times in 2011 and 2012 during a “Dream Tour” that introduced the 787 to more than 68,000 visitors in 23 countries.