Along with the Boeing Stearman Kaydet, the Tiger Moth is one of the world’s most famous primary trainers.

de Havilland first flew the DH.82 Tiger Moth at Stag Lane Aerodrome on Oct. 26, 1931. Soon after, it was adopted as the primary trainer for the Royal Air Force and throughout the Commonwealth. In 1934, the design was modified with the de Havilland Gypsy Major engine, and the fabric-covered rear fuselage was replaced with plywood; this new version was designated DH.82A Tiger Moth II.

At the outbreak of World War II, the Tiger Moth II was selected as the basic trainer for the Empire Air Training Scheme — the Australian name for the wider British Commonwealth Air Training Plan. The first of 20 Royal Australian Air Force (RAAF) Tiger Moths, A17-1, was delivered from Great Britain in May 1940.

A small number of Tiger Moths were also transferred to the Royal Australian Navy after World War II. Tiger Moths had served the RAAF for almost 17 years when the last 10 were retired on Jan. 9, 1957. 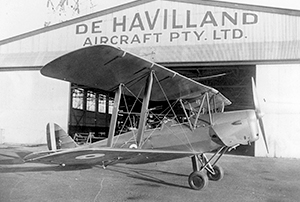