The story of what is arguably Australia’s most famous aircraft began in February 1936 when a technical mission consisting of Cdr. Wackett and Sqd. Leaders Harrison and Murphy visited European and U.S. aircraft manufacturers to investigate aircraft production, and to determine the basic features for an aircraft to be produced in Australia. Later that year, on Oct. 17, Commonwealth Aircraft Corp. (CAC) was formed to ensure that Australia had the indigenous capability to produce aircraft for the Royal Australian Air Force (RAAF).

CAC concluded that the aircraft that best represented what the technical commission had recommended was the NA-16 monoplane trainer — known as the BT-9 and BC-1 in the U.S. Army Air Corps and as the Yale in the Royal Air Force — built by Boeing heritage company North American Aviation. North American produced two prototype airplanes, designated NA-32 and NA-33, that were then shipped to Australia for evaluation. The NA-33 design was selected and modified into a combat aircraft with the addition of machine guns and strengthened wings to carry additional bomb racks. The airplane was given the aboriginal name “Wirraway” meaning “Challenge.”

The Wirraway served as a frontline combat aircraft in the first year of the Pacific War, notably supporting operations in Malaya and over Rabaul, where eight Wirraway pilots courageously intercepted more than 100 attacking Japanese planes on Jan. 20, 1942. Greatly outclassed by Japanese fighters, the Wirraway did serve successfully in Army co-operation missions during the New Guinea campaign and made Wirraway history over Gona, New Guinea, on Dec. 26, 1942, when Pilot Officer J. Archer shot down a Zeke fighter during the Battle of Buna-Gona. By mid-1943, the “Wirra” had been replaced in frontline service by the Boomerang, but continued serving as a trainer with both the RAAF and the Royal Australian Navy until 1959. 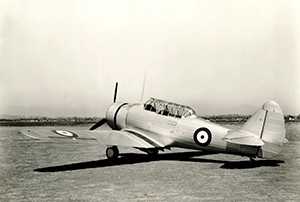