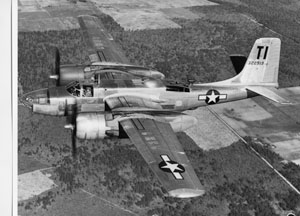 The Douglas A-26/B-26 bomber was the only American bomber to fly missions in three wars. After World War II, it served as a first-line bomber during the Korean War and during the Vietnam War. Douglas started the A-26 in 1941 to follow the A-20/DB-7 Havoc bomber.

Douglas built 2,503 A-26/B-26 Invaders. During production, a number of modifications were progressively introduced so that by 1948, the A-26 was one of the few wartime aircraft types still in service with the post-war U.S. Air Force. When the famous Martin B-26 Marauder retired and the Air Force deleted the designation "A" (for attack category), the Douglas Invader took on the B-26 designation.

Invader versions included the A-26D and A-26E light bombers, GA-26C ground training aircraft and the KA-26A tanker. Some A/B-26s were equipped for photo reconnaissance, and during the 1960s, some surplus B-26s were used to tow targets. The last U.S. military Invader was retired in 1972 and donated to the Smithsonian’s National Air and Space Museum.