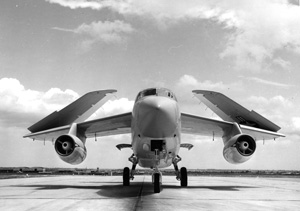 Douglas started designing the airplane in 1947, after the U.S. Navy commissioned studies to determine whether it was possible to overcome weight problems and build a carrier-based strategic bomber. The project was challenging because anything to do with nuclear armament was top secret, and designers had to guess the appearance and weight of the nuclear bombs to be carried aboard. Moreover, the internal bomb bay had to be accessible from the cockpit so that the crew could arm the nuclear device during flight.

Douglas built 282 Skywarriors. The first production version, the A-3A (A3D-1), with a radar-controlled tail turret and a crew of three, entered service with the Navy Heavy Attack Squadron One in 1956. At 70,000 pounds (31,800 kilograms), the A3D was the largest and heaviest aircraft ever to operate from an aircraft carrier.

After flying a few conventional bombing missions over North and South Vietnam, Skywarriors were used as carrier-based aerial-refueling tankers and as reconnaissance aircraft covering the Ho Chi Minh trail. As advancing technology rendered its old role obsolete, the resilient aircraft continued to evolve. It was used for electronic countermeasures, photographic reconnaissance, and crew trainers and as a VIP transport.

The revised U.S. Air Force version of the Skywarrior was named the Destroyer and designated the B-66. Douglas built 294 B-66 Destroyers. In speed, range and capacity, the B-66 twinjet met all tactical requirements for delivering the most potent weapons. The RB-66 was modified for use in night photo, electronics and weather reconnaissance.