In early 1942, Imperial Japanese forces were sweeping through the South Pacific into New Guinea, and the Solomon Islands, Australia, was faced with the imminent threat of invasion, or in the least, being isolated from the U.S. and Great Britain. And to make matters worse, the Royal Australian Air Force (RAAF) did not have fighter aircraft for home defense. To address this emergency, Commonwealth Aircraft Corp. (CAC) set out to design an indigenous interceptor, and in just 14 weeks, CAC engineers went from inception to first flight of a new fighter airplane called the Boomerang.

Following a pattern that Boeing heritage company North American Aviation set with the NA-68 (P-64) — a heavily modified fighter version of the BC-1 trainer — the Boomerang was a single-seat fighter based on the Wirraway trainer, with which it shared a common wingbox and tail unit. Ordered into production on Feb. 2, 1942, the first Boomerang, A64-1, was flown by pilot Ken Frewin on May 29, 1942.

Pilot conversion was carried out with No. 2 Operational Training Unit at Mildura, and those pilots formed the first operational units: Nos. 83, 84 and 85 Squadrons.

The Boomerang was a stopgap design and its performance was not optimal for a frontline fighter. While Boomerangs did drive off enemy air attacks, they did not destroy any enemy aircraft and were soon replaced in the fighter role by Kittyhawks and Spitfires. The Boomerang did continue to serve very effectively in combat, performing aerial reconnaissance and ground support during the New Guinea and Solomon Islands campaigns as well as in Borneo. 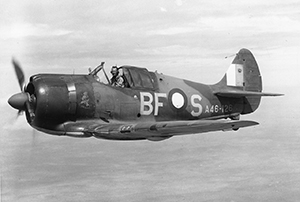