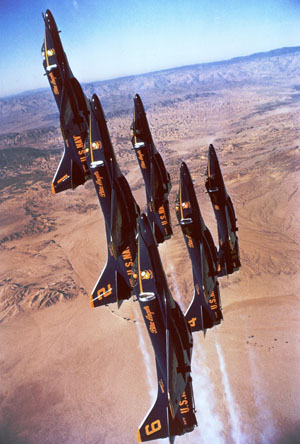 Douglas built 2,960 Skyhawks between 1954 and 1979. Built small to be cost effective and so that more of them could be accommodated on a carrier, the lightweight, high-speed bombers were affectionately nicknamed "Heinemann's Hot Rod" (after Douglas designer Ed Heinemann), the Bantam Bomber, Mighty Mite and Scooter. Skyhawks provided the U.S. Navy and Marines and friendly nations with maneuverable, yet powerful, attack bombers that had great altitude and range capabilities, plus an unusual flexibility in armament capacity.

The Skyhawk A4D was roughly half the empty weight of its contemporaries and could fly at 677 mph (1090 kph) at sea level. After 1956, it had provisions for in-flight refueling. After 1966, it included a hump-like avionics pod. Upgraded models had improved engines and a drogue parachute, new avionics displays, larger cockpit canopies and more ammunition for the two cannons. Two-seat trainer versions included the TA-4F, TA-4J and the TA-4K series.

Its combat career began with the first American carrier-launched raids on North Vietnam, Aug. 4, 1964. Later, during Israel's Yom Kippur war in 1973, Israeli Air Force Skyhawks provided much of the short-range striking power on the Sinai and Golan Heights fronts.

The Navy's Blue Angels flight demonstration squadron flew the A-4 Skyhawk II from 1974 to 1986. Skyhawks have also been used by the armed forces of Argentina, Australia, Brazil, Indonesia, Israel, Kuwait, Malaysia, New Zealand and Singapore. A number of A-4 variants were still in active military service in South America in 2021.