The de Havilland DH 98 Mosquito was one of the greatest combat aircraft of World War II. Originally conceived as a fast, unarmed, light bomber that would be able to outfly fighters, the lightweight, all-wood construction “Mossie” first flew on Nov. 25, 1940, and had a top speed of almost 400 mph. Mosquitoes were built in several different versions, including fighter-bombers (FBs), photo-reconnaissance, day and night bombers, and long-range day and night fighters.

Mosquitoes were assembled in Great Britain, Canada, and in 1942, the Australian de Havilland factory at Bankstown commenced production of an FB version of the Mosquito. A Royal Air Force Mk II (DD664) was delivered to Bankstown and used as a prototype for the Australian FB Mk 40s. It made its first flight on Dec. 17, 1942, and was later delivered to the Royal Australian Air Force (RAAF) on Jan. 28, 1943, and registered as A52-1001.

In April 1943, a new assembly building was finished at Bankstown, and the first Australian-built Mosquito FB Mk 40, A52-1, was flown July 23, 1943, by de Havilland test pilot Wing Cdr. Gibson Lee with the Merlin engines borrowed from the British sample airplane. A52-1 was accepted by the RAAF on Mar. 5, 1944.

Initial delays in production were due to the difficulties of importing engines, tools and priority equipment from de Havilland in Great Britain and Canada. Soon after production began, the manufacturer discovered an issue with wing assembly, and the first 50 sets of wings required modification. This, and the discovery of flutter issues, further delayed production, which eventually amounted to just 75 airplanes being built between March 1944 and May 1945. By the end of the war, production issues had been resolved, and 212 Mosquitoes were built at Bankstown. Of these, six FB Mk 40s were converted for photo reconnaissance as PR Mk 40s, and a further 28 were converted to PR Mk 41s, with the last delivered July 22, 1948.

The RAAF Mosquitoes saw limited, but effective, service at the end of the war in the Pacific, serving with No. 1 Squadron in Halmahera and Borneo, and No. 87 Squadron (No. 1 PRU), which performed reconnaissance missions over Java, Balikpapan, Biak, Halmahera and the Philippines. Mosquitoes were also assigned to No. 94 Squadron, No. 1 Aircraft Performance Unit, and the Aircraft Research and Development Unit.

Post war, PR Mk 41 Mosquitoes were used extensively for a large-scale air survey of Australia. The Mosquito was retired from service in 1954. 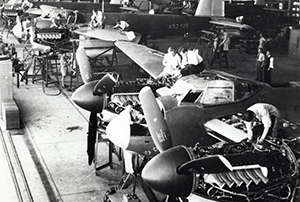