In 1943, Avro began improving the Lancaster four-engine bomber for operations in the Pacific Theater by extending the range, and adding more powerful engines and more defensive armament. The modifications were so extensive that the design became a new airplane called the Lincoln. The first Royal Air Force (RAF) Lincoln B Mk I flew on June 9, 1944, and operational squadrons were preparing to join the war against Japan when World War II ended. The Lincoln was the last piston-engine bomber flown by the RAF.

Also in 1943, plans were underway in Australia for the Beaufort Division of the Department of Aircraft Production (DAP) to build the Lancaster Mk III, but a plane with greater range was needed for operations in the Pacific, so the Lincoln B Mk 30 was chosen instead. As the war ended, DAP became Government Aircraft Factories (GAF) and the Australian government placed an order for 85 Lincolns. The first five Lincolns were constructed from British-supplied components, and A73-1 made its first flight on Mar. 17, 1946. The first Australian-built Lincoln, A73-6, was delivered in November 1946. The Lincolns became operational with Nos. 1, 2 and 6 Squadrons of No. 82 Wing, and a fourth squadron, No. 10, was added on Mar. 17, 1949, as a general reconnaissance squadron.

The Lincoln Mk 30 originally had four Merlin 85 engines, though later models were equipped with Merlin 102s and designated Mk 30A. Eighteen Lincolns, designated MR31, were modified with a 6-foot, 6-inch extension to the forward fuselage to house radar equipment and operators. This version — nicknamed the “long-nose Lincoln” — was delivered to No. 10 Squadron for maritime reconnaissance and anti-submarine missions. GAF delivered the last of 73 Lincolns built, A73-73, on Sept. 23, 1953.

Lincoln bombers saw combat with No. 1 Squadron in Malaya. This squadron arrived in Singapore on July 17, 1950, and remained there for eight years, during which time more than 3,000 sorties were carried out against the Communists. No. 10 Squadron continued to operate Lincoln MR31s until the last flight was made by A73-65 in June 1961. The Lincoln holds the distinction of being the largest aircraft to be built in Australia. 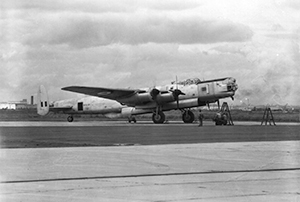