The Vampire was Australia’s first jet fighter and served in that role for 10 years before being replaced by the Sabre. From 1949 to 1953, de Havilland Aircraft built 80 single-seat Vampire fighters and fighter-bombers for the Royal Australian Air Force (RAAF) at the plant in Bankstown, New South Wales. The Australian-built Vampires were powered by the Rolls-Royce Nene jet engine, built by Commonwealth Aircraft Corp. (CAC), differing significantly from most all other Vampires that relied on the DH Goblin engine.

The first de Havilland Australia Vampire F Mk 30 (A79-1) flew for the first time in June 1949, and it was followed by 56 more F 30 variants before the final 23 aircraft were completed as FB Mk 31s modified with strengthened wings and hardpoints for bombs and rockets. The last FB Mk 31 was delivered in August 1953, and 24 late-production Mk 30s were subsequently upgraded to FB Mk 31 standard.

Vampire trainer production began with an initial order for 35 T Mk 33s for the RAAF, which were delivered in 1952. Five Mk 35s were ordered for the Royal Australian Navy (RAN) and delivered in 1954. One extra aircraft was later built to replace an RAN Vampire lost in an accident. In September 1957, the RAAF took delivery of the first of 69 Mk 35A trainers that included a modified tail and canopy, increased fuel capacity and non-skid hydraulic brakes.

The trainer variants were operated by No. 1 Advanced Flying Training School at RAAF Bases Point Cook and Pearce, the Central Flying School, and Nos. 2 and 5 Operational Training Units. Trainers were also attached to the CAF squadrons. The Vampire trainers served until they were replaced by Macchi MB-326H aircraft; the Vampires were phased out beginning in 1968, with the last flown in September 1970. RAN Vampire operations ceased the following year. 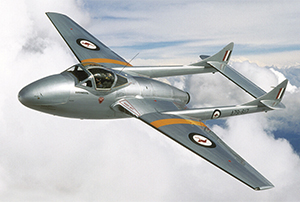