Named after Australia’s capitol Canberra, in honor of the Royal Australian Air Force (RAAF) showing early interest in the plane, the early jet bomber from English Electric first flew on May 13, 1949. In 1951, the Government Aircraft Factory (GAF) was made ready for production of the Canberra at Fishermans Bend and Commonwealth Aircraft Corp. (CAC), who began building the Canberra’s Avon engines. Two English Electric-built Canberra B-2s were purchased by Australia to serve as pattern aircraft. The delivery flight of the first Canberra in August 1951 represented the first jet flight between England and Australia. The four-day flight required six stops and covered 16,480 kilometers (10,240 miles). When the Australian crew arrived at Darwin, they had spent a total of 21.5 hours in the air.

The GAF Canberras were designated B.20, and were similar to the British B.2 with the addition of internal wing tanks. The first Canberra B.20 flew at Avalon airport on May 19, 1953. RAAF Nos. 2 and 6 Squadrons at Amberly were the first to operate the Canberra, making the transition from the Lincoln in 1955. No. 1 Squadron became the third to operate the Canberra in 1958. The last of the 48 B.20s built by GAF rolled out in December 1958. Follow-on work included converting five B.20s and the two original B.2s into trainers designated T.21.

Canberras saw combat during the Malaysian Emergency and later, in 1967, eight Canberras from No. 2 Squadron deployed to Phan Rang Air Base in Vietnam, where Australian crews flew nearly 12,000 low-level bombing missions in Southern Vietnam’s III and IV Corps tactical zones, which included the area around the capitol city of Saigon and the Mekong Delta.

During the war, two Canberras were lost, one (A84-228) was shot down by a surface-to-air missile; the crew safely ejected and were rescued. The other (A84-231), call sign “Magpie 91,” was listed as missing in action near the Vietnam-Laotian border after a successful bomb run supporting U.S. ground troops on Nov. 3, 1970. The remains of Flying Officer Michael Herbert (Pilot) and Pilot Officer Robert Carver (Navigator) were finally discovered by a Defense Historical Unit and returned to Australia on Aug. 31, 2009. No. 2 Squadron redeployed from Vietnam after its last mission on May 31, 1971.

The Canberra was eventually replaced by the F-111C, but continued limited service until 1982. 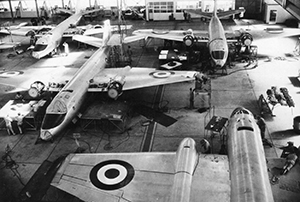