The Bristol Beaufort was derived from the Blenheim — another light bomber built by Bristol — to fulfill the requirement to carry a torpedo and to increase the crew from three to four. The first Beaufort flew on Oct. 15, 1938, and soon after the Australian Government chose the Beaufort for local manufacture. The Beaufort was the largest aircraft production effort yet attempted in Australia, and to accomplish this major challenge, the Australian Government established the Beaufort Division of the Department of Aircraft Production (DAP). Four-hundred specialized subcontractors built components for the Beaufort, which were shipped to three railway workshops for fabrication of major subassemblies that were then delivered to two final assembly plants at Fishermans Bend, Melbourne, and Mascot, Sydney.

Due to a shortage of British-built engines — a common issue in Australian aircraft production — the Beaufort was modified to use Pratt & Whitney Twin Wasp engines license-built in Australia.

On July 1, 1939, the Royal Australian Air Force awarded DAP a contract for 180 Beauforts, and the first Beaufort assembled in Australia (built from mostly British parts) was flown May 5, 1941. The first all Australian-built Beaufort (A9-7) began flight tests in August 1941. The initial batch of aircraft were designated Beaufort V, Va, VI and VII, signifying different engines and propeller manufacturers. After the first 180 planes had been built, the supply issues were solved, and in November 1942, production commenced on the next 520 aircraft designated Beaufort Mk VIII. Production of the Mk VIIIs continued at a rate of 30 per month until 1944 when production shifted to the Beaufighter.

The last 46 of the 700 Beauforts produced were converted into unarmed transports, designated Beaufort Mk IX, and soon became known as Beaufreighters.

Beauforts served with numerous units, including Nos. 1, 2, 6, 7, 8, 13, 14, 15, 32 and 100 Squadrons, and established an impressive operational record-making long-range attacks against Japanese shipping from the Solomons to Northern New Guinea and Timor. They were also used for routine convoy protection and coastal reconnaissance. Most of the Beauforts were phased out of service soon after the war; however, limited numbers were used to combat the great locust plague in 1947. 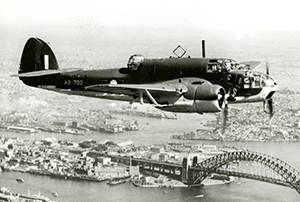