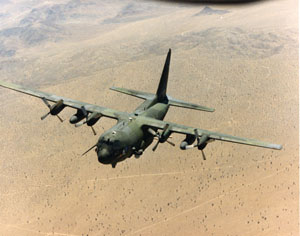 The AC-130U gunship's All Light Level Television system and its infrared detection system can both scan a full 360 degrees, allowing the gunship crew to search for and find targets much faster. The television also incorporates a laser target designator and rangefinder that allows the AC-130U to designate targets for other aircraft armed with smart, laser-guided weapons. The AC-130U also incorporates the Night Vision Imaging System, with compatible lighting throughout, to support use of night vision equipment by its crew. Its strike radar provides the first gunship capability for all-weather/night target acquisition and strike.

Boeing continues to support the aircraft for the U.S. Air Force Special Operations Command. During 2001, the aircraft flew close air support missions over Afghanistan. In 2003, Boeing began to modify four C-130Hs into AC-130Us, substantially increasing the gunship’s combat effectiveness and survivability. Another major upgrade is the integration of a 30 mm weapon, replacing the 25 mm and 40 mm guns on the U-models.

In 2012, Boeing received an $11.4 million indefinite delivery, indefinite quantity contract from the U.S. Air Force. The first delivery order under this contract was worth $4.6 million and provided parts to be used to complete installation of 25 mm Ammunition Storage and Handling Systems (ASHS) on four AC-130U gunships. Boeing has been the prime maintainer of the ASHS since 1994. The ASHS feeds ammunition to the 25 mm cannon that is located inside the aircraft's cargo hold; it is capable of carrying 3,000 rounds.