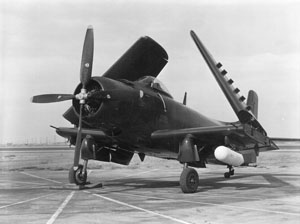 The Douglas Skyraider, with its straight, low-mounted, tapered wings, was the only aircraft of its time capable of delivering 8,000 pounds (3,630 kilograms) of bombs with dive-bombing precision against such difficult targets as mountain bridges and hydroelectric dams. The AD-4B could deliver nuclear bombs using the “toss-bombing” or “over-the-shoulder” bombing technique.

The first AD-1 Skyraider was delivered in 1946 and named according to the Douglas tradition of starting the names of U.S. Navy aircraft with “Sky.” When the Navy, Marine Corps and Air Force numbering systems merged in 1962, the “AD” series Skyraiders were redesignated as “A” series aircraft.

Before production ceased in 1957, 12 years after the airplane was introduced, Douglas built 3,180 Skyraiders in 28 variations. These included carrier- or land-based airplanes, day or night attack bombers, and versions for photographic reconnaissance, electronic countermeasures, airborne early warning, utility and search missions.

Different configurations carried a pilot in an enclosed cockpit, a pilot and another person (either a radar operator or a co-pilot), and a pilot and two other crew. The AD/A-5 could carry a crew of four, plus four passengers or 12 troops, four stretchers, or 2,000 pounds of cargo.

During the Korean War, Skyraiders first saw action over the Korean Peninsula in July 1950, and by 1955, there were 29 Navy Skyraider squadrons on carriers.

Redesignated the A-1E/A-1H in 1962, the Skyraider was modified for service in the Vietnam War in 1964 and was used by the U.S. Navy and the U.S. and South Vietnamese air forces. Because of its ability to carry large bomb loads, absorb heavy ground fire and fly for long periods at low altitude, the Skyraider was particularly suited for close-support as well as search and rescue missions.