The McDonnell Douglas Harpoon was originally developed for the U.S. Navy but in 1983 was adapted for use on B-52H bombers. The Harpoon, first deployed in 1977, is an all-weather, over-the-horizon, anti-ship missile system. It has a low-level, sea-skimming cruise trajectory with active radar guidance.

The Harpoon missile is the world’s most successful anti-ship missile and is in service with the armed forces of more than 30 countries. It has been upgraded over the years and is now available as the Harpoon Block II. It also led to the development of the standoff land attack missile (SLAM) and subsequently the SLAM expanded response (SLAM-ER).

The Harpoon is capable of executing both land-strike and anti-ship missions. To strike targets on land and ships in port, the missile uses GPS-aided inertial navigation to hit a designated target aimpoint. The 500-pound blast warhead delivers lethal firepower against a wide variety of land-based targets, including coastal defense sites, surface-to-air missile sites, exposed aircraft, port/industrial facilities and ships in port. For conventional anti-ship missions, such as open ocean or near-land, the GPS/INS improves midcourse guidance to the target area. The accurate navigation solution allows users to discriminate target ships from islands or other nearby land masses or ships. 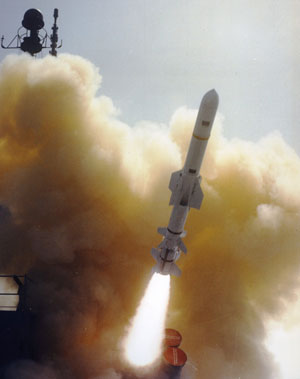