The Boeing AGM-86B/C air launched cruise missile is a long-range subsonic, 3,200-pound self-guided missile carried by a B-52 bomber at high and low altitudes. Armed with a nuclear warhead, it is designated ALCM. With a conventional warhead, it is designated CALCM. The missile electronically “sees” the terrain over which it flies and can travel more than 1,500 miles to hit the target. Boeing began modifying the ALCM inventory from nuclear to nonnuclear warheads in June 1986.

The AGM-86C configuration features a 3,000-pound-class, high-explosive, blast-fragmentation warhead and a Global Positioning System, or GPS, receiver for accurate inertial navigation. The AGM-86D program modifies additional ALCM missiles with an advanced penetrating warhead to quickly provide theater commanders with a long-range weapon to precisely attack an enemy’s most valuable facilities. The penetrator warhead allows the missiles to destroy buried or reinforced targets from standoff ranges of hundreds of miles.

The missile’s wings and tail surface can fold around its fuselage so it can be carried inside or outside the bomber. A B-52, for example, can carry 20 AGM-86 missiles, eight in a rotary launcher in the bomber weapons bay and another 12 on pylons under the wings.

Because of its long range, the missile can be launched far from hostile territory and still reach its target. After launch, the wings and tail unfold and the turbofan engine powers the missile at subsonic speeds. The AGM-86 collects electronic data from the land below, compares the readings with maps stored on its computer and adjusts its flight to reach its destination. It has a low radar cross section and can cruise at low altitudes, making it hard to detect. 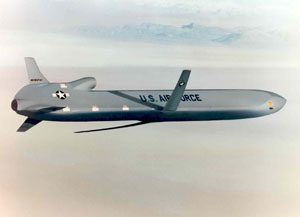