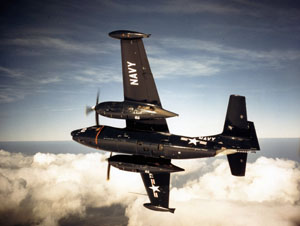 The AJ Savage was the first U.S. bomber designed especially to carry the atomic bomb. It was North American's first attack bomber specifically for the U.S. Navy and was designed shortly after the end of World War II. It was a large twin-engine heavy-attack aircraft, as big as Air Force medium bombers of the time, such as the B-45 Tornado.

In those early years of jet aircraft development, manufacturers were exploring ways to provide power using piston engines and a jet engine on the same airframe. The AJ-1 attack bomber used two 2,400-horsepower piston engines to power four-bladed propellers for long-range cruise. It then fired a 4,600-pound-thrust turbojet engine for extra speed over the target.

The AJ Savage had a crew of three and a single tail unit. Its folding wings allowed it to be stored on an aircraft carrier. After building three XAJ-1 prototypes and a static test model, North American began delivering the AJ-1.

The Savage entered service in September 1949 and carrier operations began in April 1950 on the USS Coral Sea. North American built more than 140 in the series. Later, some AJ models were converted into aerial tankers. Others, the AJ-2Ps, with a modified radome, carried 18 cameras. Their night shots were illuminated by a photo-flash unit in the fuselage. These models were standard equipment for the Navy heavy photographic squadrons until the early 1960s.