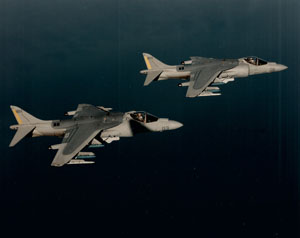 Based on the 1957 British-designed Hawker-Siddley Kestrel, the AV-8B Harrier II was developed by a team representing McDonnell Douglas, British Aerospace and Rolls-Royce. Production of the St. Louis, Mo.-built AV-8B began in 1981, and more than 340 Harrier IIs were produced. They carried more fuel than the earlier AV-8As and had higher lift and better cruise characteristics.

In 1991, Harrier IIs were the first U.S. Marine Corps tactical aircraft to arrive for Operation Desert Storm over the Persian Gulf. During the 42 days of combat, 86 Harrier IIs flew 3,380 combat sorties (4,112 combat hours) and delivered more than 6 million pounds of ordnance.

A fixed-wing vertical/short takeoff and landing (V/STOL) aircraft, its ability to take off vertically makes it one of the most maneuverable combat aircraft in service. It can zoom out of the range of enemy fire extremely quickly.

Production of both versions ended in 2003 with the St. Louis, Mo., delivery of the last AV-8B. In 2007, Boeing signed a $258.5 million performance-based logistics contract to support AV-8B Harriers operated by the U.S. Marine Corps, Italy and Spain.