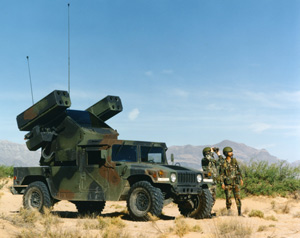 Mounted on a high-mobility, multipurpose wheeled vehicle, the Avenger can operate in extreme weather conditions. Its infrared system, computer, communications equipment and laser rangefinder locate targets in daylight and at night.

The Avenger turret can be easily adapted to different combat vehicles, such as trucks, trailers and track vehicles, or employed as a remotely operated autonomous unit. Its system is highly automated to rapidly and efficiently assist the gunner with target location, identification, tracking and missile lock-on. Total system performance is optimized by the automatic insertion of lead angle and super elevation at missile launch. Avengers can be airlifted by helicopter and, when pallet-mounted, dropped from tactical aircraft.

The Avenger was a valuable U.S. Army asset during the Persian Gulf War and is fielded in U.S. units throughout the world. In addition, the system is produced for the Army National Guard and for Foreign Military Sales contracts.

Boeing delivered the first production unit in 1988, and by 2002 more than 1,100 Avenger units had been delivered to the Army, Marine Corps and National Guard. Upgraded with new products, Avenger production is planned beyond 2005.