The B-1 was the company’s first offering for the civil market, and although it had a successful career, only one was built. A “pusher-style” flying boat, with its engine at the rear, it could carry a pilot and two passengers, as well as mail or cargo. The hull was laminated wood veneer, and the wing frames were spruce and plywood.

After its first flight on Dec. 27, 1919, it outlasted six engines in eight years of international airmail runs between Seattle, Wash., and Victoria, British Columbia. In an era with few airports, a boat that could land on water made sense. Flown by Eddie Hubbard, the B-1 covered 350,000 miles (563,000 kilometers) — remarkable for the time.

The B-1 mail flights took off from Lake Union in Seattle, and today, meticulously restored, it hangs from the ceiling of the Museum of History and Industry on the shore of Seattle’s Lake Union that served as its base of operations. 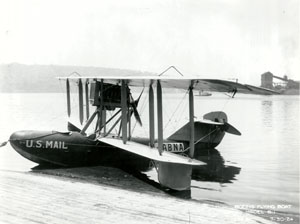