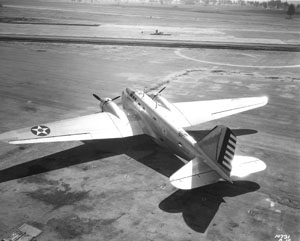 The twin-engine B-18 Bolo was the first Douglas medium bomber. It was a combat version of the DC-2 commercial transport, absorbed punishment well and was especially useful during the early days of World War II.

The prototype (Douglas Bomber 1, or DB-1), finished in 1935, was designed around the DC-2's wings, but had a deeper and fatter fuselage with a bomb bay under its center section. The single DB-1 later was used to test the firing of large cannons from an aircraft.

Douglas produced 370 of the production model B-18 Bolos, and their availability during the late 1930s allowed the Air Corps to train bomber crews. The B-18 Bolos made up most of the bombers deployed outside the country as the United States entered World War II.

B-18 Bolos were used for antisubmarine operations in American and Caribbean waters and as trainers and transports. Twenty served as general reconnaissance bombers with the Royal Canadian Air Force as Digby Mk1s.

In November 1938, Douglas used the stronger wings of the DC-3, a new and better streamlined fuselage, and large fin and rudder for the Bolo's successor — the B-23 Dragon. The first of 38 B-23 Dragons built flew July 27, 1939. The 26,500-pound (12,000-kilogram) B-23 bomber incorporated the first tail turret installed in an Air Corps bomber and was powered by two 1,600-horsepower Wright R-2600-3 engines. Following the war, many Dragons were adapted as corporate aircraft.