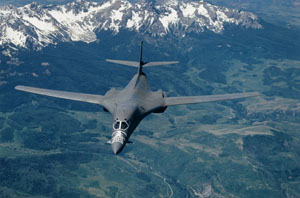 The B-1 Lancer is a swing-wing bomber intended for high-speed, low-altitude penetration missions. Its first flight was in December 1974, but by June 1977 the program was canceled. Four Rockwell International B-1As were built and used for flight testing with the final flight made in April 1981. In October, President Ronald Reagan revived the program as the B-1B. It first flew Oct. 18, 1984, could operate at 60,000 feet and had a range of more than 7,000 miles. The U.S. Air Force ordered 100 B-1Bs in 1982, and the first B-1B aircraft was delivered to the Air Force at Edwards Air Force Base, Calif., in October 1984, just 33 months after contract go-ahead. The last Rockwell B-1B rolled out of final assembly at Palmdale, Calif., on Jan. 20, 1988.

Initial delivery to the Strategic Air Command took place in June 1985, at Dyess AFB, Texas. On Oct. 1, 1986, the B-1B achieved initial operational capability, and by November 1986, B-1Bs were coming off the production line at a rate of four per month. B-1Bs were based at Dyess AFB, Texas; Ellsworth AFB, S.D.; McConnell AFB, Kan.; Robins AFB, Ga.; and Mountain Home AFB, Idaho. In 2001, the Air Force decided to retire 33 B-1Bs and remove the aircraft from Mountain Home and the Georgia and Kansas Air National Guard bases. The remaining aircraft were consolidated at Dyess AFB and Ellsworth AFB.

The B-1B holds 61 world records for speed, payload and distance. The National Aeronautic Association recognized the B-1B for completing one of the 10 most memorable record flights for 1994.

The first combat use of the B-1B was in December 1998 during operation Desert Fox, where the aircraft penetrated Iraqi air defenses to destroy Republican Guard barracks. This debut mission validated the B-1B's conventional role and its ability to operate in a force package. In 1999, six B-1Bs were deployed to Royal Air Force Base Fairford, England, to support Operation Allied Force in Kosovo. Those six aircraft dropped more than 20 percent of the total tonnage in the conflict. In operation Enduring Freedom, B-1Bs dropped 40 percent of the weapons and 70 percent of the precision-guided JDAM weapons.