Boeing submitted the proposal for the B-29 long-range heavy bomber to the Army in 1940, before the United States entered World War II.

One of the most technologically advanced airplanes of World War II, the B-29 had many new features, including guns that could be fired by remote control. Two crew areas, fore and aft, were pressurized and connected by a long tube over the bomb bays, allowing crew members to crawl between them. The tail gunner had a separate pressurized area that could only be entered or left at altitudes that did not require pressurization.

The B-29 was also the world’s heaviest production plane because of increases in range, bomb load and defensive requirements.

The B-29 used the high-speed Boeing 117 airfoil, and its larger Fowler flaps added to the wing area as they increased lift. Modifications led to the B-29D, upgraded to the B-50, and the RB-29 photoreconnaissance aircraft. The Soviet-built copy of the B-29 was called the Tupolev Tu-4.

The earliest B-29s were built before testing was finished, so the Army established modification centers where last-minute changes could be made without slowing expanding assembly lines.

B-29s were primarily used in the Pacific theater during World War II. As many as 1,000 Superfortresses at a time bombed Tokyo, destroying large parts of the city. Finally, on Aug. 6, 1945, the B-29 Enola Gay dropped the world's first atomic bomb on Hiroshima, Japan. Three days later a second B-29, Bockscar, dropped another atomic bomb on Nagasaki. Shortly thereafter, Japan surrendered.

After the war, B-29s were adapted for several functions, including in-flight refueling, antisubmarine patrol, weather reconnaissance and rescue duty. The B-29 saw military service again in Korea between 1950 and 1953, battling new adversaries: jet fighters and electronic weapons. The last B-29 in squadron use retired from service in September 1960. 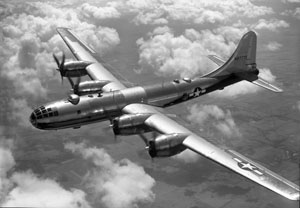