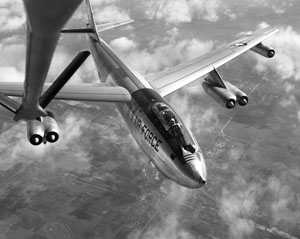 The best way to tell about the performance of the Stratojet is to say that any good crew could have flown it. It took no unusual ability or education. Neither Scott Osler nor I deserve any credit for the flight. Rather, the credit should go to the men who carried out these visions on the drafting boards and the factory workers who made the visions a reality.
— Robert Robbins, test pilot for the B-47, 1949

The Boeing B-47 was the country's first swept-wing multiengine bomber. It represented a milestone in aviation history and a revolution in aircraft design. Every large jet aircraft today is a descendant of the B-47.

Boeing engineers had envisioned a jet-powered plane as early as 1943. However, wind tunnel tests of straight-wing jet aircraft indicated that the straight wing did not use the full potential of jet-engine power.

Near the end of World War II, Boeing aerodynamicist George Schairer was in Germany as part of a fact-finding mission. At a hidden German aeronautics laboratory, Schairer saw wind tunnel data on swept-wing jet airplanes and sent the information home. Engineers then used the recently completed Boeing High-Speed Wind Tunnel to develop and design the XB-47, with its slender 35-degree swept-back wings.

Another innovation pioneered on the B-47 was the concept of placing the engines in pods (nacelles) suspended under the wings. A pod containing two General Electric J-35 engines (GE J-47 engines for all production models) hung from each wing inboard, and a single engine hung farther out. The B-47 had tandem bicycle-type landing gear under the front and back sections of the fuselage. Small outrigger wheels on the inboard engines kept the airplane from tipping over when it was on the ground.

Because early jet engines could not provide enough thrust for takeoff, the XB-47, B-47A, and B-47B had 18 small rocket units in the fuselage for jet-assisted takeoff (JATO). Thrust reversers and antiskid brakes had not yet been developed, so a ribbon-type drag parachute reduced the B-47 landing speed.

Once airborne, the graceful jet broke speed and distance records; in 1949, it crossed the United States in under four hours at an average speed of 608 mph (978 km/h). The B-47 needed defensive armament only in the rear because no fighter was fast enough to attack from any other angle.

The B-47 medium bomber became the foundation of the Air Force's newly created Strategic Air Command, and many were adapted for several specialized functions. One became a missile carrier, others were reconnaissance aircraft or trainers or carried remote controls for other aircraft. Between 1947 and 1956, a total of 2,032 B-47s in all variants were built. Boeing built 1,373, Douglas Aircraft Co. built 274 and Lockheed Aircraft Corp. built 385.