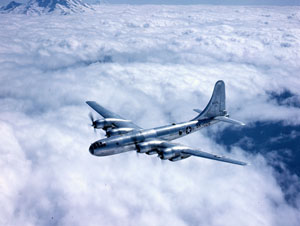 The four-engine, propeller-powered Boeing B-50 bomber was among the last piston-powered bombers built during an era that was to be dominated by jets, particularly the B-47 and the B-52. In 1949, the B-50A, the Lucky Lady II made the first nonstop flight around the world in 94 hours, refueled in flight four times by KB-29Ms.

The B-50 evolved from the B-29D, but because it included so many improvements, it was redesignated the B-50A, with 59 percent more power than the B-29. Other improvements were more aerodynamic nacelles, larger flaps, fast-retracting ball-screw landing gear, hydraulic rudder boost, hydraulic nosewheel steering and heated-wing deicing. It also had a higher vertical tail that folded when the bomber rolled into standard-height hangars. The B-50's wing, made from the new 75ST aluminum alloy, was 16 percent stronger and 600 pounds (272 kilograms) lighter than the otherwise identical B-29 wing.

Sixty B-50As were ordered by the U.S. Army Air Forces before the end of World War II, and delivery began in 1947. In all, 79 B-50As were built. The next version, the B-50B, was heavier, with a gross weight of 170,000 pounds (77,110 kilograms). Fitted with cameras and wing tanks, it was designated of RB-50B and used for strategic reconnaissance. The B-50D was distinguished by a one-piece transparent-plastic nose molding and an optically flat bombardier's window in the lower portion. Some B-50s were later converted to hose-type KB-50 aerial tankers, their speed enhanced by the addition of two 5,200-pound-thrust (235-kilogram-thrust) jet engines, so at 400 mph (644 km/h) they could refuel jet aircraft. Thirty six B-50Ds became long-range reconnaissance aircraft (WB-50D); serving until 1967, these were the last B-50s to be retired.

The final production version of the B-50 was the TB-50H, 24 of these bomber-navigation trainers were built and were later converted to KB-50K tankers.