In August 2014, the B-52 Stratofortress celebrated 60 years in the air. The eight-engine, 390,000-pound (176,901-kilogram) jet was America’s first long-range, swept-wing heavy bomber. It began as an intercontinental, high-altitude nuclear bomber, and its operational capabilities were adapted to meet changing defense needs.

B-52s have been modified for low-level flight, conventional bombing, extended-range flights and transport of improved defensive and offensive equipment — including ballistic and cruise missiles that can be launched hundreds of miles from their targets.

It had a rocky beginning. The original XB-52 design, selected by the Army Air Forces in 1946, was for a straight-wing, six-engine, propeller-powered heavy bomber. On Oct. 21, 1948, Boeing Chief Engineer Ed Wells and his design team were in Dayton, Ohio, when the Air Force’s chief of bomber development told them to scrap the propellers and come up with an all-jet bomber. Over the following weekend, in a Dayton hotel room, the team designed a new eight-engine jet bomber, still called the B-52, made a scale model out of balsa wood and prepared a 33-page report.

This effort impressed the Air Force’s Air Materiel Command, and the design was approved. As the war worsened in Korea, the Air Force, in 1951, designated the B-52 the country’s next intercontinental bomber and approved an initial production order for 13 B-52s. The first B-52A flew Aug. 5, 1954.

After assembly of three B-52As, production converted to B-52Bs, with more weight and larger engines. Some had photoreconnaissance or electronic capsules in their bomb bays and were redesignated RB-52Bs. The turbofan powered B-52H, the final version of the B-52, made its first flight March 6, 1961, and is still in service.

On Oct. 26, 2012, Boeing marked 50 years since it had delivered its last B-52 Stratofortress to the U.S. Air Force. H-model bomber 61-040 had been assigned to Minot Air Force Base, N.D., where it remained in active service. Modern engineering analyses showed the B-52’s expected lifespan extending beyond 2040.

In May 2014, the Air Force introduced the first B-52 aircraft upgraded with an advanced communications system developed by Boeing into its fleet. The Combat Network Communications Technology (CONECT) modification added several communication data links, full-color LCD displays with real-time intelligence feeds overlaid on moving maps, a state-of-the-art computing network, and the ability to retarget a weapon, or mission parameters, in flight. At that time, the Air Force operated 76 B-52s primarily out of Barksdale Air Force Base, La.; Minot Air Force Base, N.D., and Andersen Air Force Base, Guam, and planned to upgrade all of them. 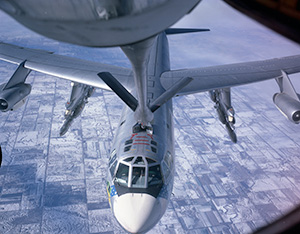