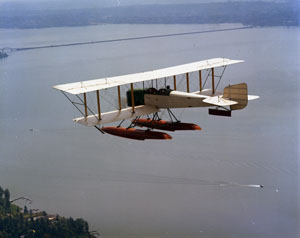 The B & W was the first Boeing product, named after the initials of its designers, William Boeing and U.S. Navy Lt. Conrad Westervelt.

The first B & W, completed in June 1916, was made of wood, linen and wire. Inspired by the Martin TA trainer that Boeing owned, the B & W had, among other improvements, better pontoons and a more powerful engine.

The two B & Ws were offered to the U.S. Navy. When the Navy did not buy them, they were sold to the New Zealand Flying School and became the company's first international sale. The B & Ws later were used for New Zealand express and airmail deliveries, set a New Zealand altitude record of 6,500 feet (1981 meters) feet on June 25, 1919, and made that country's first official airmail flight on Dec. 16, 1919.