In 1942, the British-built Beaufighter began operating with the Royal Australian Air Force (RAAF) under the designation A19. These aircraft proved to be extremely effective in operations and are particularly well known for their role in the Battle of the Bismarck Sea. In January 1943, the Department of Aircraft Production (DAP) made the decision to end Beaufort production in favor of an Australian-built version of the Beaufighter.

The Bristol Company dispatched 55,000 drawings via Airgraph Service (similar to the United States’ “Victory Mail”) to DAP. The original plan was to produce an Australian equivalent of the British Beaufighter Mk VII, but it was ultimately decided to build a version similar to the British Beaufighter TF Mk X, which was designated DAP Bristol Beaufighter Mk 21. Unlike the British version, the Air-to-Surface Vessel (ASV) radar and dorsal fin were never applied to the DAP model. However, like the Mk X aircraft flown by RAAF crews in Europe, all the Hercules XVII engines had their two-speed blowers made fully operational, thus becoming Hercules XVIIIs.

The first DAP Beaufighter was flown on May 26, 1944, and five days later, the aircraft was taken over by the RAAF and given the designation A8. As production continued at Fishermans Bend and Mascot factories, the Australian A8 Beaufighter began to replace the British A19 Beaufighter. Beaufighters saw combat throughout New Guinea, the Celebes, Borneo and the Philippines. The longest mission flown by the Australian Beaufighters was a bomber escort mission to Tarakan on May 2, 1945, as part of the opening moves of Operation Oboe, the campaign to liberate Borneo. Beaufighters served with Nos. 22, 30, 31, 92 and 93 Squadrons, and when production ceased at the end of 1945, a total of 364 DAP Beaufighters had been built.

In the post-war years, Beaufighters continued to operate with No. 30 Squadron, where they were gradually reduced to a target-towing role. The last aircraft, A8-357, was flown to Edinburgh for disposal on Dec. 9, 1957. 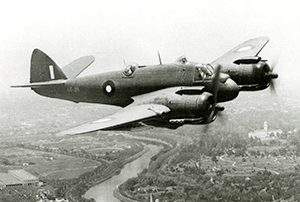