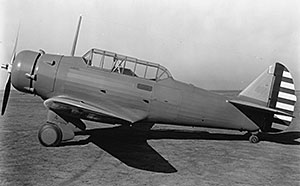 The BT-9 "Yale" Army Air Corps basic trainer evolved from North American Aviation's NA-16, the last prototype built in the General Aviation plant at Dundalk, Md. The production model, the NA-19, was first flown at Inglewood, Calif. The Navy version of the trainer was designated NJ-1.

The BT-9, a two-seat monoplane with enclosed tandem cockpits, was of all-metal construction with removable fabric-covered side panels for easy maintenance. The engine and its accessories could be removed as a unit and changed in less than an hour. The BT-9C included a fixed forward gun that fired through the propeller arc and a flexibly mounted gun in the rear cockpit.

North American built a total of 766 BT-9s and NJ-1s, and the initial follow-up to the BT-9 series was the BC "Basic Combat" trainer which was then followed by the ubiquitous T-6/SNJ “Texan” series. During the next decade, North American produced more than 17,000 variants of the trainer at the company's Los Angeles, Calif., and Dallas, Texas, plants. In addition, four other countries built about 4,000 more under special license.