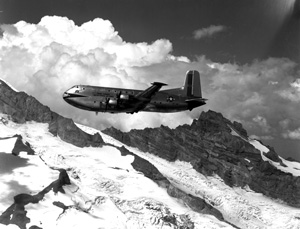 The Douglas C-124 Globemaster II, also fondly called “Old Shaky,” could carry more than 200 troops. It had clamshell-type loading doors, built-in double hydraulic ramps and an elevator under the aft fuselage. It could load tanks, field guns, bulldozers and trucks.

Deliveries of the C-124A Globemaster II began in May 1950, and before production ended in 1955, the U.S. Air Force purchased 448. The Globemaster IIs provided airlift support in the Far East and Southeast Asia, went on resupply missions to Antarctica, evacuated refugees from the Congo, and made mercy flights to Morocco, Chile and elsewhere throughout the world following floods and other natural disasters.

By 1970, most C-124s were transferred to the Air Force Reserve and Air National Guard. Although in production for only five years, the C-124s had a long and useful service life. The last C-124 was phased out in 1974.