The Douglas C-133 Cargomaster, a four-engine turboprop transport, was larger and faster than earlier Douglas military cargo airplanes. The Cargomaster went into production without a prototype and had an unusual circular fuselage with top-mounted wings.

The C-133 could fly the equivalent of 22 loaded railroad boxcars nonstop between Los Angeles, Calif., and New York for about 5 cents per ton per mile (907 kilograms per 1.6 kilometers). It carried fully assembled tanks and transported the Douglas-built Thor intermediate-range ballistic missiles. Douglas built and delivered the last Cargomasters in 1961. NASA used Cargomasters to drop-test early space capsules and to transport a variety of space products. Douglas built 50 Cargomasters, but after the C-133, Douglas did not build transports specifically for the military for another 10 years. 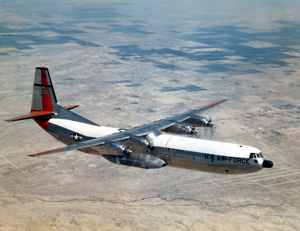