The C-17 Globemaster III is a high-wing, four-engine, T-tailed aircraft with a rear loading ramp. In 1980, the U.S. Air Force asked for a larger transport that could be refueled in flight and use rough forward fields so that it could fly anywhere in the world. On Aug. 28, 1981, McDonnell Douglas won the contract with its proposal to build the C-17. The design met or exceeded all Air Force design specifications, and the huge transport was able to use runways at 19,000 airfields.

The C-17 was built in Long Beach, California, and the first C-17 squadron was operational in January 1995. The C-17 fleet has been involved in many contingency operations, including flying troops and equipment to Operation Joint Endeavor to support peacekeeping in Bosnia and the Allied Operation in Kosovo. Eight C-17s, in 1998, completed the longest airdrop mission in history, flying more than 8,000 nautical miles (14,816 kilometers) from the United States to Central Asia, dropping troops and equipment after more than 19 hours in the air.

In May 1995, the C-17 received the prestigious Collier Trophy, symbolizing the top aeronautical achievement of 1994. In February 1999, President Bill Clinton presented the nation's top award for quality — the Malcolm Baldrige National Quality Award — to Boeing Airlift and Tanker programs, maker of the C-17, for business excellence.

On Dec. 20, 2010, the worldwide fleet of C-17 Globemaster III airlifters surpassed 2 million flying hours during an airdrop mission over Afghanistan. Reaching 2 million flight-hours equates to 1.13 billion nautical miles — the equivalent of a C-17 flying to the moon and back 2,360 times.

On Sept. 18, 2013, Boeing announced it would complete production of the C-17 Globemaster III and close the C-17 final assembly facility in Long Beach in 2015. Dennis Muilenburg, who was president and CEO of Boeing Defense, Space & Security at the time but today serves as chairman, president and CEO of The Boeing Company, said, “Our customers around the world face very tough budget environments.”

By February 2014, Boeing had delivered 260 C-17s, including 223 to the U.S. Air Force and a total of 37 to Kuwait, Australia, Canada, India, Qatar, the United Arab Emirates, the United Kingdom and the 12-member Strategic Airlift Capability initiative of NATO and Partnership for Peace nations. 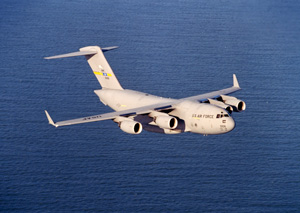