In 1960, Boeing bought Vertol, a helicopter manufacturer in Philadelphia, Pa. The company had three tandem-rotor helicopters under production: the Chinook for the U.S. Army, the Sea Knight for the Navy and the Marines, and the commercial 107-II for the airlines.

The twin-turbine tandem-rotor CH-46A Sea Knight won a design competition for a medium assault transport helicopter for the Marine Corps in 1961 and made its first flight in August 1962.

The first U.S. Marine Corps Sea Knight was delivered in 1964 and began military service during the Vietnam War a year later, carrying troops and cargo to and from Navy ships in the China Sea.

Between 1964 and 1990, Boeing Vertol delivered more than 600 Sea Knights. The passenger version of the Sea Knight, the Model 107-II, entered service with New York Airways in July 1962. During the 1980s and 1990s, Boeing developed modification kits and upgrades to modernize the Sea Knights.

The Sea Knight, affectionately known as the “Phrog,” is no longer in production. It has served in such venues as Vietnam, Beirut, Desert Storm, Iraq and Afghanistan. The CH-46 was replaced by the V-22 Osprey. In October 2014, the Marines flew the last service flight of the CH-46. 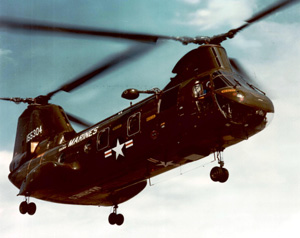