The military career of the Douglas DC series began in 1936, when the U.S. Army Air Corps ordered a pair of DC-2 commercial transports under the designation C-32. A contract followed for 18 DC-2s in the C-33 freighter configuration and two more as C-34 staff transports. Then, in 1937, the U.S. Army ordered a plane built to its own specifications. It was a hybrid design that combined the fuselage of the DC-2 with a DC-3 tail. This was the sole C-38 prototype, and it led to 35 production versions called the C-39. The C-39 represented the first serious effort by the Army to establish an airlift capability.

By 1941, the old Air Corps had been transformed into the Army Air Forces, and it selected a modified version of the DC-3 — the C-47 Skytrain — to become its standard transport aircraft. A reinforced fuselage floor and the addition of a large cargo door were the only major modifications. Other changes included the fitting of cargo hooks beneath the center wing section and the removal of the tail cone to mount a hook for towing gliders.

As a supply plane, the C-47 could carry up to 6,000 pounds of cargo. It could also hold a fully assembled jeep or a 37 mm cannon. As a troop transport, it carried 28 soldiers in full combat gear. As a medical airlift plane, it could accommodate 14 stretcher patients and three nurses. Seven basic versions were built, and the aircraft was given at least 22 designations, including the AC-47D gunship, the EC-47 electronic reconnaissance aircraft, the EC-47Q antiaircraft systems evaluation aircraft and the C-53 Skytrooper.

Every branch of the U.S. military and all the major allied powers flew it. The U.S. Navy version was the R4D. The British and the Australians designated it the Dakota (a clever acronym composed of the letters DACoTA for Douglas Aircraft Company Transport Aircraft). The aircraft operated from every continent in the world and participated in every major battle. By the end of World War II, more than 10,000 had been built. For all of its official and unofficial names, it came to be known universally as the “Gooney Bird;” General Dwight D. Eisenhower, Supreme Commander of Allied Forces in Europe, termed it one of the most vital pieces of military equipment used in winning the war.

C-47s remained in active military service long after the end of World War II. They played a critical role in the 1948 Berlin Airlift and saw action in the Korean and Vietnam wars. 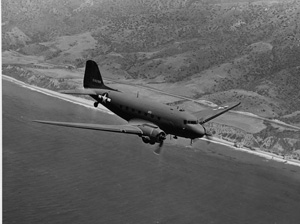