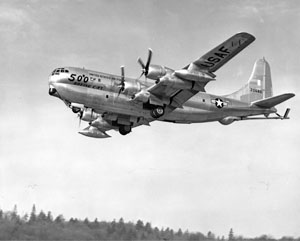 Toward the end of World War II, Boeing developed the Model 367, a military transport based on the B-29 bomber. Its civilian counterpart was the Model 377 Stratocruiser. Designated the C-97, it had a double-lobe fuselage consisting of two intersecting circular sections, so that the 74-foot-long (23-meter-long) upper deck had a larger diameter.

Cargo was loaded through large clamshell-type doors in the belly of the aircraft using a built-in ramp and a hoist. Its wings, engine gear and other parts were similar to the B-29. In January 1945, an XC-97, piloted by Maj. Curtin L. Reinhardt, set a transport speed record by flying 383 mph (617 kph) between Seattle, Wash., and Washington, D.C., with 20,000 pounds (9072 kilograms) of cargo. The production version that flew in June 1949 had outboard wing fuel tanks to increase its range.

During the Korean War, C-97s were used to evacuate casualties. Others became flying command posts for Strategic Air Command (SAC) personnel. The C-97 was designated KC-97 when it was equipped with the Boeing-designed flying boom for aerial refueling — the boom had controls so the boom operator or “boomer” could literally "fly" the end of the boom from the KC-97 aerial tanker into the receiving airplane.

Sales of the KC-97s helped pull Boeing out of the postwar slump, and because they extended the range of bombers and fighters, the KC-97 tankers became crucial to SAC operations.