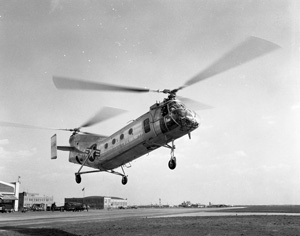 The H/CH-21 Shawnee/Vertol 44 was the first helicopter to make a nonstop transcontinental flight across the United States. Originally designed for high-altitude, cold-weather operations, the first H-21s joined the U.S. Air Force in 1953 for rescue operations in the Arctic. Proving to be rugged and reliable, the Shawnee also served in Alaska, Northern Canada and Greenland.

Initially designated Piasecki Model 44, the H-21 Shawnee was the fourth tandem-rotor helicopter designed by Frank Piasecki, founder of the P-V Engineering Forum, later the Piasecki Helicopter Corp. After Piasecki left the enterprise in 1955, it became the Vertol Aircraft Corp. Boeing bought Vertol in 1960.

Although the Shawnee usually had a crew of two (pilot and copilot), it could carry either 20 fully equipped troops or 12 litter patients. In the U.S. Air Force, it earned the nickname "Workhorse" and, along with others in the tandem-rotor series, was also called the "flying banana."

The U.S. Air Force took its first delivery of the H-21 in August 1957, and the helicopter was deployed to Myrtle Beach Air Force Base, S.C., and Havana, Cuba.

Redesignated CH-21B in 1962, the CH-21 served in Vietnam until 1964, when it was replaced by the UH-1 "Huey" and the CH-47 Chinook. The Shawnee went on to support the Utah Test and Training Range until its retirement in April 1971, to Davis-Monthan Air Force Base, Ariz. It was dropped from the Air Force inventory the following November.

The CH-21C version served in combat with the French in Algeria as well as with the armed forces of Canada, Sweden and West Germany. The commercial transport version, the Vertol 44, was operated by several airlines. A total of 707 in the CH-21 series were built.