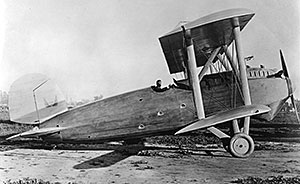 The Cloudster was the first Douglas product. It was also the first airplane in history to airlift a useful load exceeding its own weight. The strut-braced wood, wire and doped-cloth (glue-covered) biplane was powered by a World War I surplus 400-horsepower Liberty engine. David R. Davis funded the establishment of the Davis Douglas Co. to build an airplane that would make the first nonstop flight across the country.

Components were built in the loft of a Los Angeles, Calif., planing mill rented by Donald Douglas, lowered down a shaft and trucked to Goodyear Field, where they were assembled in a hangar.

On March 19, 1921, the original Cloudster broke the Pacific Coast altitude record by climbing 19,160 feet (5839 meters). On June 27, 1921, it started out on its flight across the country but had to make a forced landing at Fort Bliss, Texas. After the Cloudster's transcontinental flight was aborted, Davis lost interest and left the company. Two Army pilots in a Fokker monoplane ultimately beat the Cloudster in its quest to make the first nonstop flight across the country.

The Cloudster was later rebuilt as an airliner and sold to Claude Ryan of San Diego, Calif. With the ability to carry 12 passengers, the Cloudster became the flagship of Ryan's San Diego–to–Los Angeles airline, one of the first scheduled passenger lines in the country.

It ended its career making chartered flights between Los Angeles and San Diego, and it flew beer to Tijuana, Mexico, after the 1926 floods. During a chartered flight to Ensenada, Mexico, the Cloudster made a forced landing on the beach and was destroyed by the high tide.