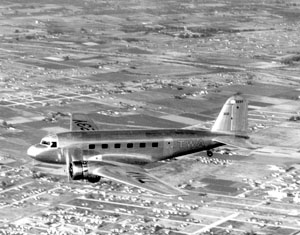 Introduction of the DC-1 (Douglas Commercial Model One) in 1933 marked the beginning of 64 years of continuous production of passenger planes by the Douglas Aircraft Co.

The airplane was designed as a series prototype for TWA to compete against the revolutionary Boeing Model 247 ordered by Boeing subsidiary United Air Lines. The DC-1 exceeded all but one of the tough specifications set by its buyer — TWA wanted three engines; the DC-1 had only two.

The DC-1 was very advanced for its day. Its fuselage was streamlined, as were its wings and engine cowlings. It featured all-metal construction and retractable landing gear. Variable-pitch propellers gave the plane remarkable takeoff and landing characteristics. With plush seats, a kitchen and a comfortable restroom, the DC-1 set a new standard for passenger comfort.

The DC-1 carried 12 passengers (two more than the Model 247) and could fly as fast as 180 mph (289 kph). In April 1935, it set a transcontinental speed record, covering the distance from Los Angles, Calif., to New York in 11 hours, five minutes. Pleased with its new plane, TWA placed an order for 25 larger aircraft designated the DC-2. Enlarged once more, the DC-2’s basic design evolved into the world famous DC-3. For all the DC-1’s historical significance, only one was built.