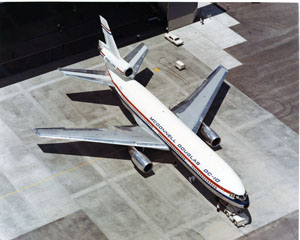 The McDonnell Douglas DC-10 was produced in three basic models, the Series 10 for domestic routes to 3,500 miles (5632 kilometers) and the Series 30 and 40 for extended range and intercontinental travel. DC-10s were modified as passenger/cargo convertible versions and as the KC-10 aerial tanker for the U.S. Air Force.

In addition to the luxury and spaciousness inherent in its wide cabin, the three-engine DC-10 incorporated improvements in propulsion, aerodynamics, structure, avionics, flight control systems and environmental compatibility that advanced industry standards.

On June 23, 2010 Boeing announced that it had received a $216 million contract from the Air Force to upgrade the service’s 59-jet KC-10 tanker fleet with a new communication, navigation, surveillance and air traffic management (CNS/ATM) system.