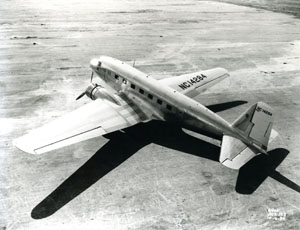 Inspired by the technical success of the Douglas DC-1, the DC-2 was introduced less than a year after the DC-1’s first flight.

The new plane was similar in shape to the DC-1 but had more powerful engines, was faster and was capable of longer flights. More important, it was 2 feet longer and could carry two more passengers — 14 instead of 12.

The DC-2 was an instant hit. In its first six months of service, the DC-2 established 19 American speed and distance records. In 1934, Transcontinental & Western Air put DC-2s on overnight flights from New York to Los Angeles. Called “The Sky Chief,” the flight left New York at 4 p.m. and, after stops in Chicago, Kansas City, Missouri, and Albuquerque, New Mexico, arrived in Los Angeles at 7 a.m. For the first time, the air traveler could fly from coast to coast without losing the business day.

The DC-2 was the first Douglas airliner to enter service with an airline outside the United States. In October 1934, KLM Royal Dutch Airlines entered one of its DC-2s in the London-to-Melbourne, Australia, air race. It made every scheduled passenger stop on KLM’s regular 9,000-mile (14,484-kilometer) route (1,000 miles, or 1,609 kilometers, longer than the official race route), carried mail and even turned back once to pick up a stranded passenger. Even so, the DC-2 finished in second place behind a racing plane built especially for the competition. After that, the DC-2’s reputation was ensured, and it became the airplane of choice for many of the world’s largest airlines.

In 1935, the DC-2 became the first Douglas aircraft to receive the prestigious Collier Trophy for outstanding achievements in flight. Between 1934 and 1937, Douglas built 156 DC-2s at its Santa Monica, California, plant.