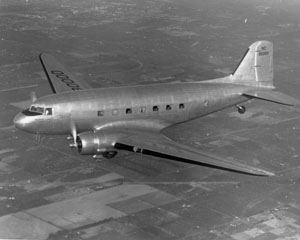 The Douglas DC-3, which made air travel popular and airline profits possible, is universally recognized as the greatest airplane of its time. Some would argue that it is the greatest of all time.

Design work began in 1934 at the insistence of C.R. Smith, president of American Airlines. Smith wanted two new planes — a longer DC-2 that would carry more day passengers and another with railroad-type sleeping berths, to carry overnight passengers.

The first DC-3 built was the Douglas Sleeper Transport — also known as Skysleepers by airline customers — and it was the height of luxury. Fourteen plush seats in four main compartments could be folded in pairs to form seven berths, while seven more folded down from the cabin ceiling. The plane could accommodate 14 overnight passengers or 28 for shorter daytime flights. The first was delivered to American Airlines in June 1936, followed two months later by the first standard 21-passenger DC-3.

In November 1936, United Airlines, which had been a subsidiary of Boeing until 1934, became the second DC-3 customer. The DC-2 had proved more economical than the Model 247, and United assumed the DC-3 would continue that lead. Initial orders from American and United were soon followed by orders from more than 30 other airlines in the next two years.

The DC-3 was not only comfortable and reliable, it also made air transportation profitable. American's C.R. Smith said the DC-3 was the first airplane that could make money just by hauling passengers, without relying on government subsidies. As a result, by 1939, more than 90 percent of the nation's airline passengers were flying on DC-2s and DC-3s.

In addition to the 455 DC-3 commercial transports built for the airlines, 10,174 were produced as C-47 military transports during World War II. For both airline and military use, the DC-3 proved to be tough, flexible, and easy to operate and maintain. Its exploits during the war became the stuff of legend. Today, more than six decades after the last one was delivered, hundreds of DC-3s are still flying and still earning their keep by carrying passengers or cargo.