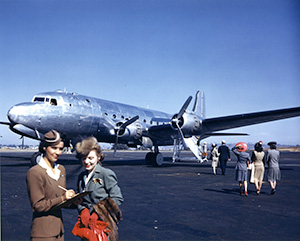 In 1938, Douglas Aircraft Co. decided to produce a four-engine transport about twice the size of the DC-3. It developed the single DC-4E to carry 42 passengers by day or 30 by night. The DC-4E had complete sleeping accommodations, including a private bridal room.

It proved too expensive to maintain, so airlines agreed to suspend development in favor of the less complex DC-4, which was not put into commercial service until 1946. Its military derivative was the C-54 ”Skymaster” transport, ordered by the U.S. Army Air Forces in 1942.

Douglas built 1,241 of the DC-4s and its military counterparts, including the R5D for the Navy. During the war, C-54s flew a million miles a month over the rugged North Atlantic — more than 20 roundtrips a day. A special VC-54C, nicknamed the ”Sacred Cow” by the White House press corps, became the first presidential aircraft, ordered for Franklin D. Roosevelt.

After World War II, commercial airlines placed more than 300 civilian DC-4 transports into service, these DC-4s, along with C-54s converted for civil use, carried more passengers than any other four-engine transport. Some were still flying through 2014.