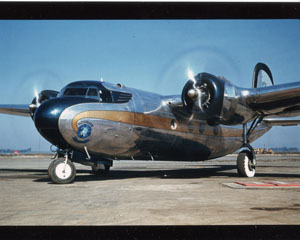 The twin-engine DC-5 was the only DC-series aircraft designed by Ed Heinemann, creator of the A-4 Skyhawk, in the El Segundo plant in California. With its high-wing, the DC-5 was more similar to the DB-7 bomber than the previous DC airliners.

The DC-5 prototype and four production DC-5s were built before World War II. The 16-seat airliner featured innovative tricycle landing gear and was intended for shorter routes, but by the time it entered service in 1940, the war was under way.

Only five civilian DC-5s were built as the Douglas Aircraft Co. turned its attention to military airplanes; William Boeing bought the prototype for his personal use. It later served with the U.S. Navy as the R3D-3. KLM bought the other four airplanes, and these were used to evacuate civilians from Java to Australia in 1942. One was captured by the Japanese, one was scrapped after a landing accident, and two later joined the U.S. Army Air Forces as C-110s.

The DC-5 entered service with the U.S. Navy and seven were built as R3Ds. Three R3D-1s became 16-seat personnel carriers, and the four R3D-2s with the U.S. Marine Corps became 22-seat paratrooper versions of the plane.