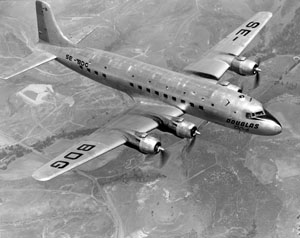 The Douglas DC-6 was one of the first airplanes to fly a regularly scheduled around-the-world route. With its higher performance, increased accommodation, greater payload and pressurized cabin, it was a natural evolution of the DC-4.

American Airlines and United Airlines ordered the commercial DC-6 in 1946, and Pan American Airways used the DC-6 to start tourist-class service across the North Atlantic. The 29th DC-6 was ordered by the U.S. Air Force, adapted as the presidential aircraft and designated the VC-118. It was delivered on July 1, 1947, and named The Independence after President Harry Truman’s hometown, Independence, Mo.

By the end of the twentieth century, DC-6 airplanes were still flying around the world.